COVID-19: ONLY DISTANCE TREATMENTS ARE CURRENTLY AVAILABLE. CLICK FOR DETAILS. 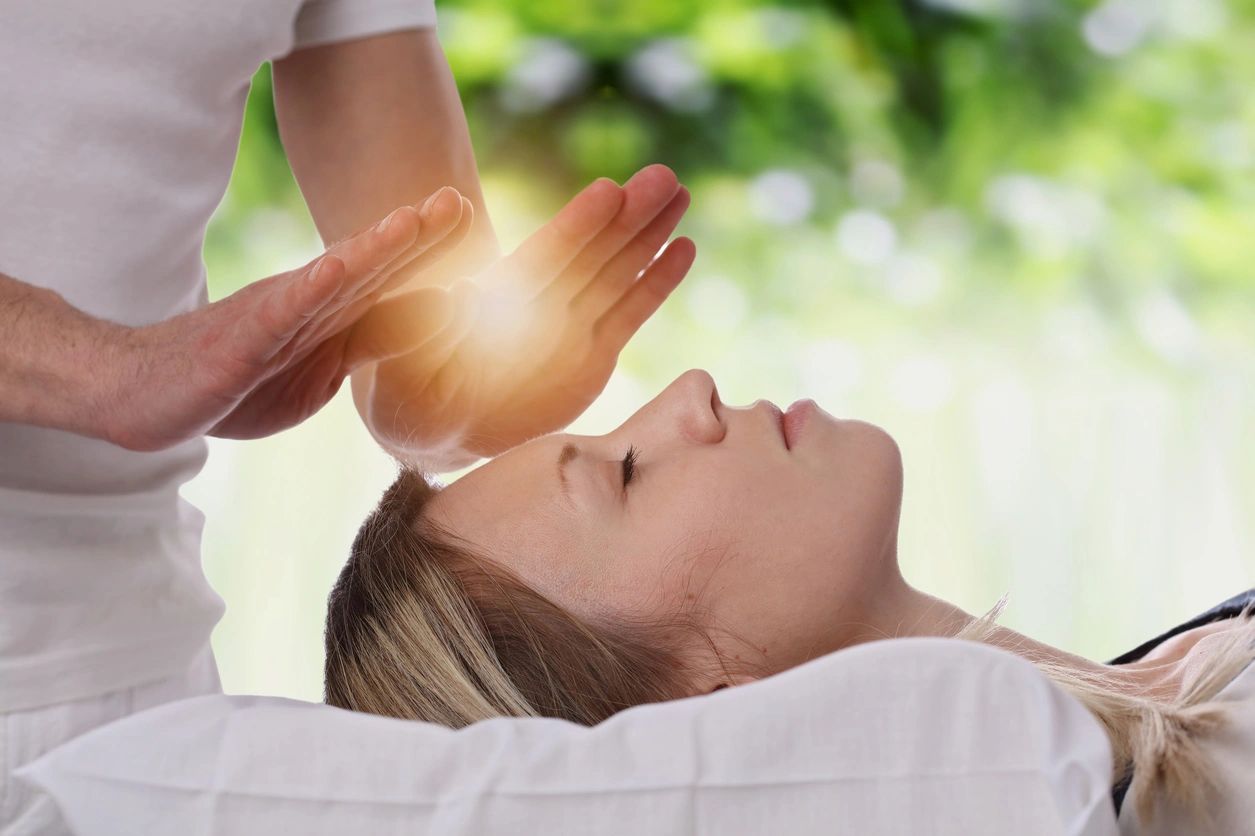 Why I love Reiki

My name is Ann Burness, I am 61 years old.  I first became interested in Reiki after I managed to injure myself by opening a heavy door, leaving me with a large herniated disc and considerable pain.  Doing physiotherapy had no impact and I was eventually told the only way forward was surgery.  While I was waiting for this to happen, someone very kindly did a distance treatment and 'sent' Reiki to me. This proved to be a turning point for me, and over the following days my pain began to subside to a point where I was able to function again, and this improvement continued.  I was still advised to have the surgery, but by the time of my operation I was pain free and not taking any medication.

This experience made me decide that I wanted to train to become a Reiki Practitioner myself, so that I could enjoy Reiki whenever I wanted, and also help my family and our dogs and cat.

My Journey So Far

I have been using Reiki for eleven years with people and animals, for the last eight years as a Reiki Master Practitioner.  All of the studying I have done has been through courses that have been approved with the UK Reiki Federation, so fulfil the National Occupational Standards for Complementary and Natural Healthcare.  I am a UK Reiki Federation member and this involves continued professional development, I meet this by reading, and attending regular mentoring and training events, to help keep me informed of new ideas and techniques.  I have also done an Animal Reiki course through a different training provider.

If you are interested in being attuned to Reiki, click on the link below for information about my courses.

My aim as a practitioner is to help you begin to heal yourself, so that you can have balance within your body and mind, allowing you to feel relaxed and peaceful.  Many people who enjoy Reiki frequently find their overall state of mind is more positive and they are able to live in that 'now' moment more often, rather than continually worrying and thinking about the past and the future.

Reiki as defined by the Oxford English Dictionary is: "A healing technique based on the principle that the therapist can channel energy into the patient by means of touch, to activate the natural healing processes of the patient's body and restore physical and emotional well-being"

Reiki  is a complementary therapy used alongside conventional medicine but not as a replacement for.

The Japanese word Reiki (pronounced ray-key) actually translates as 'Universal Life Energy'.  The Universe is filled with invisible energy that is present in all living things, flowing through our energy centres (chakras), network of meridians (energy pathways) and into our aura (energy field surrounding our physical body).  When the energy flow is uninterrupted, it allows balance and harmony within and around us; we can then experience well-being and peace. The energy is known as 'Ki' in Japan, 'Chi' in China, and 'Prana' in India.  Acupuncture, Tai Chi, and Yoga are also based on the free-flow of this energy in a person.

Reiki is simply beautiful, and how privileged we are to be able to use this gentle but powerful healing energy alongside, but not as an alternative to conventional medicine.  Reiki is always used only for good, not linked to any religion, and can be enjoyed by all age groups and states of health.  Reiki is deeply relaxing, calming, and can help us cope with day to day pressures and stresses.

Quite understandably, some people might struggle to believe that this energy that we can't see can make such a difference to overall well-being.  It could be likened to a lamp plugged into an electrical socket; when the switch is turned on, energy is able to flow freely into the lamp and the bulb will light.  The moment that the switch is turned off and the energy flow is blocked, the bulb will no longer glow.  So receiving Reiki encourages energy to flow freely through the chakras, meridians and aura and help to keep the body, mind and emotions balanced.

When regularly used over time, Reiki may also help to change the life choices that you make, and the way you think about and approach things.

How Reiki Can Help

All healing comes from within and Reiki helps to heal by raising the vibration in and around the physical body.  This can then help to clear the energy pathways that can become 'blocked' by negative experiences, thoughts and feelings, allowing energy to flow naturally and restoring balance.

The purpose of Reiki is to treat holistically, so helping the whole being - body, mind and spirit, so it can help to support the healing of various physical and emotional symptoms, restoring homeostasis.

Most people deeply relax, or even fall asleep during a Reiki treatment.  This relaxed state gives the body the opportunity to begin it's own natural self-healing process and regenerative ability, and make adjustments to help improve health and well-being.

These Principles that Mikao Usui put into place give us the recipe for an ideal life!  The idea behind the 'Just for today ...'  is that it is difficult to make massive changes in your life all in one go, so if you can work on these things just for that day, and then take each day at a time, eventually it becomes a way of life.

The History of Reiki - Brief and Simple

The founder of the Usui System of Reiki, or Usui Shiki Ryoho, was Dr Mikao Usui.  He was born on the 18th August 1865 to a fairly wealthy Buddhist family who encouraged him to study, both academically and physically.  He was introduced to martial arts from the age of twelve after entering a Tendai Buddhist monastery near Mount Kurama, training in many ancient Japanese arts and reaching the highest level of proficiency.

He was interested in different types of medicine, religions and energy movement, and devoted many years searching for a system that would allow him to heal himself and others.  As part of his search he travelled to China and the West to learn about different medicines and disciplines.  Although he took part in many different types of work, he was led back to Buddhism.  For three years beginning in 1922 he trained in Zen Buddhism.

Also in 1922 Mikao Usui went on a spiritual pilgrimage to Mount Kurama near Kyoto, Japan.  He spent 21 days on the mountain top, fasting, praying and meditating with him finding no real enlightenment.  However, on the 21st day, he began seeing ancient Sanskrit symbols, which he realised would help him develop the healing system he had been searching for.  He then set up healing centre where he began healing and teaching other people to use Reiki.  Because his belief was that before you can begin to heal others, you have to heal yourself, his main teaching revolved around this principle, and this has been continued into the First Degree Reiki (Level One) training.  He taught many people, but just seventeen reached the highest level.  After a large earthquake hit Japan in 1923 killing and injuring many people, Usui went out every day to treat the wounded using Reiki, and is said to have saved many lives.

Chujiro Hayashi, a retired naval medical officer, was one of Usui's student's and had a huge influence in how Reiki was developed.  After he had been introduced to Reiki, he set up a healing clinic in Tokyo.  Because he had the knowledge of anatomy and medicine, he may well have introduced the additional hand positions that continue on into teachings today, and give a much better overall flow of energy through the body. One of his most important teachings was with Mrs Hawayo Takata; it was through her influence that Reiki was spread into the western world.  Hayashi was a very peace-loving man and rather than have to face being forced to serve in World War II, he chose to end his own life in 1940.  After his death, his wife Chie Hayashi continued the branch of Reiki that he had developed.

Mrs Hawayo Takata was born in December in 1900 in Hawaii to Japanese parents.  She met Dr Chujiro Hayashi after becoming ill while visiting her parents who had returned to live in Japan.  While she was waiting to have surgery, she had a belief that she could be healed in a different way.  She was told of a new healing method and directed towards Dr Hayashi's clinic.  She received Reiki daily and was inspired so much that she desperately wanted to learn how to use Reiki herself.  In exchange for her free work within his clinic, Dr Hayashi taught her the first two levels of his healing method.  She later returned to Hawaii and opened her own clinic, and it was here that Dr Hayashi visited and completed his teaching with her so that she was then able to pass on this knowledge and teach others.

Mrs Takata taught many students in the United States and Canada the first two levels, and then in 1972 she began to teach the third degree (Reiki Master Level), up to the point of her death in 1980, she had taught twenty-two Reiki Masters.  These Masters have continued to teach which has allowed Reiki to be spread widely across the western world.

One of Mrs Takata's twenty-two masters was Phyllis Furomoto.  It is through her that all of the Masters in our lineage have learned how to use Reiki.

Unfortunately, due to the Covid-19 outbreak, I have had to suspend all in-person treatments and training until further notice.

I can still offer distance Reiki treatments, so if is something that you might be interested in, please get in touch!

In the meantime, stay safe.

Find out more about distance treatments